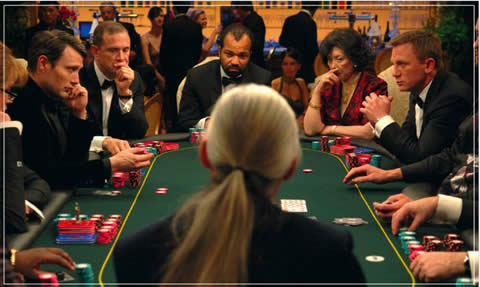 THE BEST POKER SCENES FROM THE MOVIES

Nothing compares to the thrill and fun of playing a hand of poker. Chips fly, cards clatter on the table and everyone holds their breath. Of course, the seventh art couldn't ignore the dramatic potential of poker, and has given us countless cult scenes.

Here are six of the best poker scenes from the movies, spanning nearly five decades of film history. The stage is set for an exciting roller coaster ride that only poker can provide!

What better way to start this selection than with a whole movie dedicated to poker! This 1998 film, starring a young Matt Damon and Edward Norton in one of the most underground poker scenes, is without doubt a benchmark film for fans.

The superb final poker match between rookie Mike (Matt Damon) and Teddy "KGB", during which Mike puts it all on the line against the angry and unpredictable KGB, set against a backdrop of death, love, revenge and friendship, is a must-see for any self-respecting poker fan. The debt is paid off, Mike gets back his smile and his sweetheart, and can finally achieve his World Series of Poker dream. A happy, Hollywood ending.

Let's face it, Daniel Craig did a great job as 007, and Casino Royale is an excellent James Bond movie, serving up a darker and more human vision of the super spy. The film gives us one of the most elegant high-stakes poker scenes in history against the icy supervillain, Le Chiffre.

As always, things started off badly for Bond, who has to make up for it and save the world (no less) on $1 million blinds. The tension reaches its peak and the final moment when the all-in on a pot of more than $100 million, where all the best possible poker hands are revealed in a single move, remains, despite its undeniable improbability, a poker scene of great aestheticism. Even though we suspected that Bond would win in the end, the suspense is still there! And with lots of slowrolls along the way…

Eric "The Kid" Stoner has just one thing on his mind: showing the world his poker skills. When he learns that poker champion Lance "The Man" Howard is coming to town, he challenges him to a private game, where the stakes turn out to be more dangerous than he'd imagined.

The final poker hand between The Kid and The Man is considered by many to be the best poker hand ever filmed. Sure, poker purists may have a problem with the poker rules and etiquette, but the tension and drama of the scene between two players with pride and unwillingness to give in is well worth it.

This film tells the story of Johnny Hooker, a crook in old-school Chicago, then ruled by the mob, who has to go on the run after incurring the wrath of a mob boss. A dark story of revenge and big money, the film offers us a black poker scene as we like it, where anything goes except respecting the rules and fair play. It maybe isn't the best scene to give a chic and serious image of poker, but it's a nice movie scene with cigars, Italian suits, glasses of cognac and cheating at every level.

Bret Maverick is a notorious card player and con artist whose ultimate goal is to enter a major poker tournament to win the money he desperately needs – and in the process prove once and for all that he is indeed number one.

This ultimate game offers plenty of twists and turns for fans of old-school poker and westerns, with five-card poker, "in the dark" play and plenty of ego on the table. Fortunately today, everything can be done without guns!

In this dystopia, it isn't about money: time is the universal currency. As the main character Will Salas (played by Justin Timberlake) is just seconds away from losing all his time and facing death, he engages in a poker game with a loan shark called Weis and ends up betting centuries of life on one hand, with Salas having just 8-4 offsuit. This scene gives a new perspective to cinematic poker, since the protagonists are no longer playing for money but for their lives. It's a very tense poker scene, where the famous "all-in" takes on a whole new meaning!

A hero call like no other, all this under the eyes of a Phil Hellmut hidden away in the scene. Can you spot him?